You Are Here:Home / Highlands Ability Battery (HAB) / Where Ideas Flourish: The Ideal Environment For Solving Problems 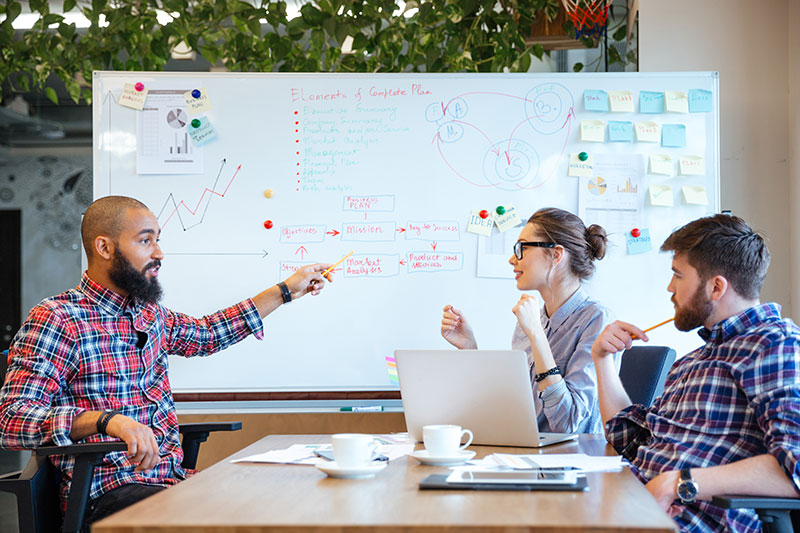 We’ve talked before about how people approach problem-solving differently. We know from our extensive work with the Highlands Ability Battery (HAB) that the driving abilities play a big role in how people intuitively tackle problems. Those who test high on the Classification continuum, for example, can quickly make connections between seemingly disparate pieces of information. Meanwhile, people who score high on the Concept Organization continuum are able to create a clear and logical path from point A to point B that can easily be followed by others.

When a group of people are tasked with solving a problem together, as is often the case in corporate office environments, it’s beneficial to have a variety of problem-solving styles. Research has shown that cognitive diversity within a group creates a tremendous advantage.

But there are other factors that affect decision making within groups. And while they may not be as easily identifiable, they are just as important when it comes to the team’s ability to effectively solve problems.

Researchers Alison Reynolds and David Lewis recently reported their findings from a year-long study in which they collected data from over 150 senior executives from different organizations around the world. Having already established the importance of cognitive diversity in team problem-solving, this time they set out to uncover why cognitive diversity alone doesn’t guarantee success.

Their article The Two Traits of the Best Problem-Solving Teams reveals that the other key component is psychological safety. Cognitive diversity doesn’t have much impact if the organizational culture is controlling, cautious, and resistant, because people don’t feel safe to express their different opinions. When conformity is highly valued, anyone who has an idea that is outside the box is left to flail under the unyielding conventions that govern behavior (i.e., tow the line or else!).

In contrast, the characteristics of a psychologically safe environment include curious, engaging, inquiring, nurturing, forceful, experimental, and flexible. The most successful organizations are those with high levels of both cognitive diversity and psychological safety.

How the Highlands Co Brings These Two Traits Together

Leaders and managers can use the HAB to assess the strengths of their team, including cognitive diversity. The HAB brings objective clarity that doesn’t rely on self-reporting or the intuitive powers of a particular person.

The process of taking the HAB and discussing the results within a safe environment also brings the psychological safety piece into play. We’ve seen over and over how illuminating the HAB results can be, shedding light on people’s own behavior as well as on that of their colleagues.

When people understand that they won’t be penalized for voicing their opinions or shamed for trying something new, they quickly become more engaged. Curiosity is piqued when confronted with a problem, and everyone displays more ownership in finding solutions. The result? A higher performing team.

Are you ready to take your organization to greater levels of success? We’d love to help. Contact us today and we’ll show you how higher levels of cognitive diversity and psychological safety are possible through the HAB.